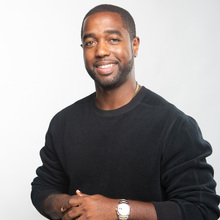 Tony A. Gaskins Jr, is a Husband and Father first. Outside of that, he's a bestselling author, international speaker, and celebrity life coach. Tony's passion for student athletes stems from his failures as a college football player where he was kicked off his team after three seasons for conduct that was detrimental to the team. Five years after losing his scholarship Tony was called to speak to high school, college, and pro athletes at camps and rookie programs for basketball and football players. Tony went on to be the team life coach for college basketball teams, and then became the first life coach hired by an NBA team as the team life coach. His mess is now his message. Tony's ability to connect with players comes from passion and a heartfelt message. Being a life coach he also provides practical steps college athletes can use long after his speech is over. Every year Tony is called on to work with countless college athletes around the country. Understanding that he can't be everywhere is the reason Character University was created. Although Tony would love to come work with your team, if you need a little more and would like to dive deeper with your players over several weeks, this program is for you. Tony can be reached for live engagements at booktony@tonygaskins.com